Beard Maintenance On The Road

Mrs Braw and I headed off on a road trip at the weekend, partly to relax and partly to scout for photoshoot locations. I had never seen the Callanish Standing Stones or the beautiful beaches that Harris and Lewis have to offer. Mrs Braw has cycled the Hebridean Way before and was desperate to go visit again, so we did.
She told me how bad the wind and weather can be and how beard maintenance may be an issue…

When I’m on the road, I always carry a small beard care kit. It’s not to make me look pristine everyday (that’s not my jam), it’s to keep my beard manageable, healthy and moisturised. I don’t want it getting brittle, dried out and damaged.

We planned to camp, so that meant showers may not be available, making beard care even more essential.

I’ll take you through the journey and what I used when.

We set off after work and drove towards Mallaig where we managed to find somewhere to pitch up for the night.
In the morning, I applied my usual few drops of Braw Beard oil, combed it through to detangle from sleeping. Then applied some Beard Butter and brushed that through, simple enough beard maintenance.

Then we boarded the ferry to Armadale on the Isle of Skye, visited the Fairy Pools and Fairy Glen then boarded the ferry from Uig (Skye) to Tarbert (Harris). The weather was so warm and muggy so we were feeling pretty sweaty, I had tied my beard with a band to save it acting as a windsock on the deck of the ferry.

We had heard how nice Horgabost beach was and there’s a campsite there so it made sense to make use of it for the night. That evening I managed to take a shower using Braw Beard Wash to clean my beard from sweat, dust and spray from sea salt. Before going to sleep, I used the usual few drops of Braw Beard oil, combed through to get any snags out. I applied Braw Beard Butter (a little more than usual for a deep condition) and brushed that through with the boar bristle brush to evenly distribute the products.

Before getting a shower at Horgabost.

In the morning, I used a little Jarls Northman 1263 beard oil and combed that through to detangle after sleeping, then we set off to check out more locations.

Luskentyre Beach was somewhere we wanted to check out, man was it windy! 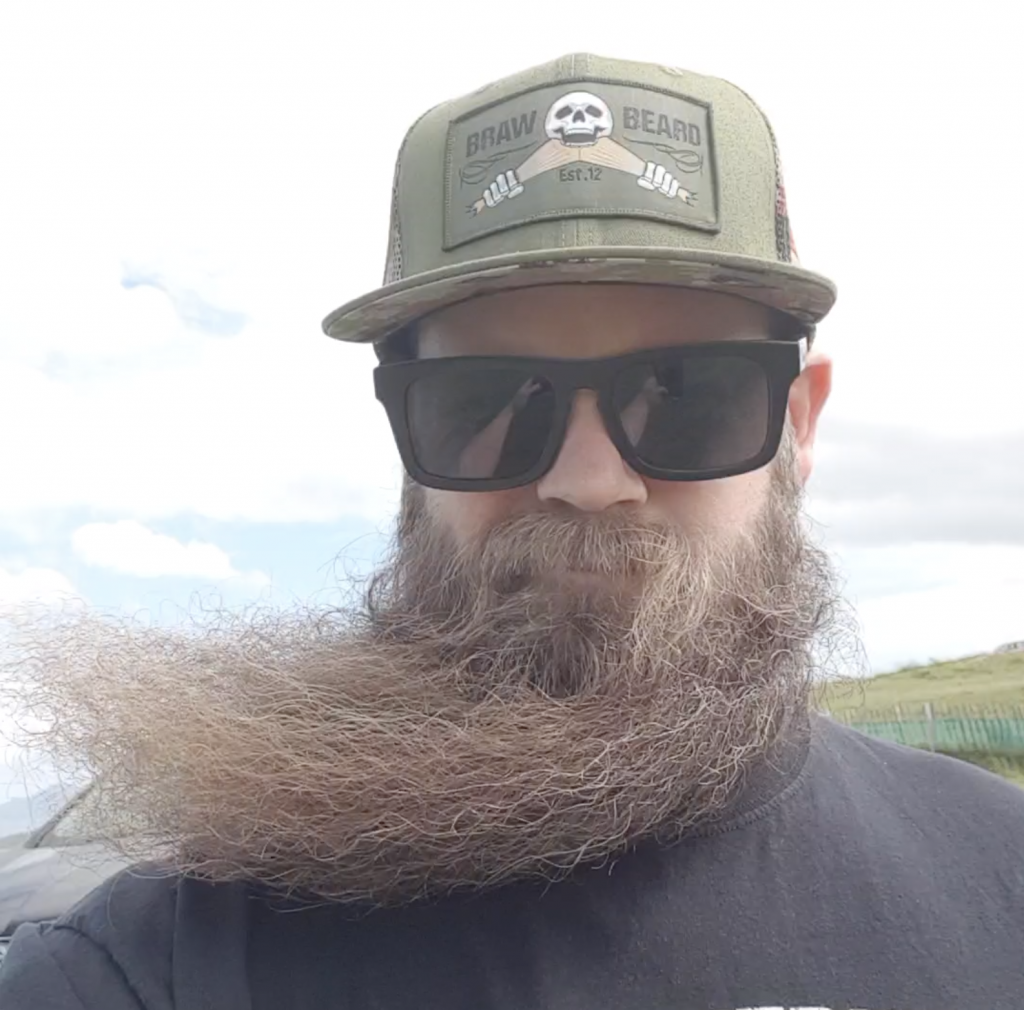 The persistent wind can strip the oils from your hair, leaving it dry and brittle. Knowing I was definitely going for a dip in the sea, there was no point in beard maintenance at this point, it was about to get doused in salt water anyway. 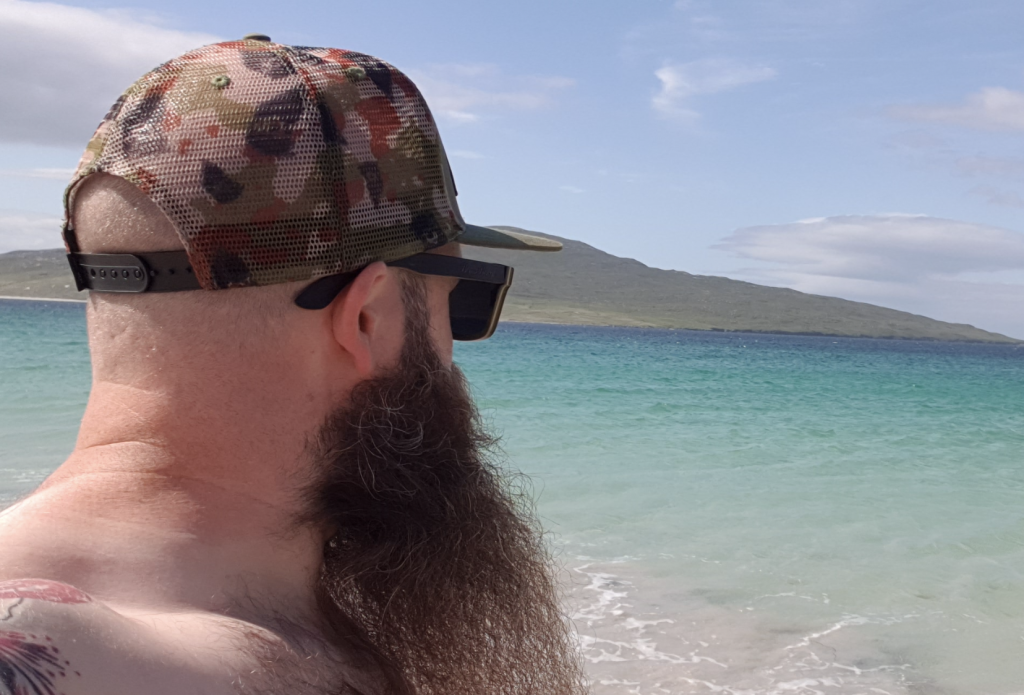 Once my beard was gently towel dried, I tied it with a band to keep it from flapping around in the wind. The wind and salt water had left the hair feeling very dry, itchy and brittle. I didn’t want the wind doing any damage to the hair at the root so I tied it down.

The day was passing quickly so we set off to our next destination to sleep for the night, Hushinish.

Luckily there was a shower.

Same script as the previous night really, in the shower I used Braw Beard Wash to clean my beard from sweat, dust and sea salt. Before going to sleep, I used the usual few drops of Braw Beard oil, combed through to get any snags out. I applied Braw Beard Butter (a little more than usual for a deep condition) and brushed that through with the boar bristle brush to evenly distribute the products.

In the morning I applied a little Jarls Beard oil again and combed through and set off. That was the last time we had shower access until the last day so the beard care until this point was key to making it more manageable for the upcoming couple of days.

I took Jarl to see the Callanish Standing Stones

Before finding the next camping spot, many places were visited and shots taken, here’s a sneak preview… 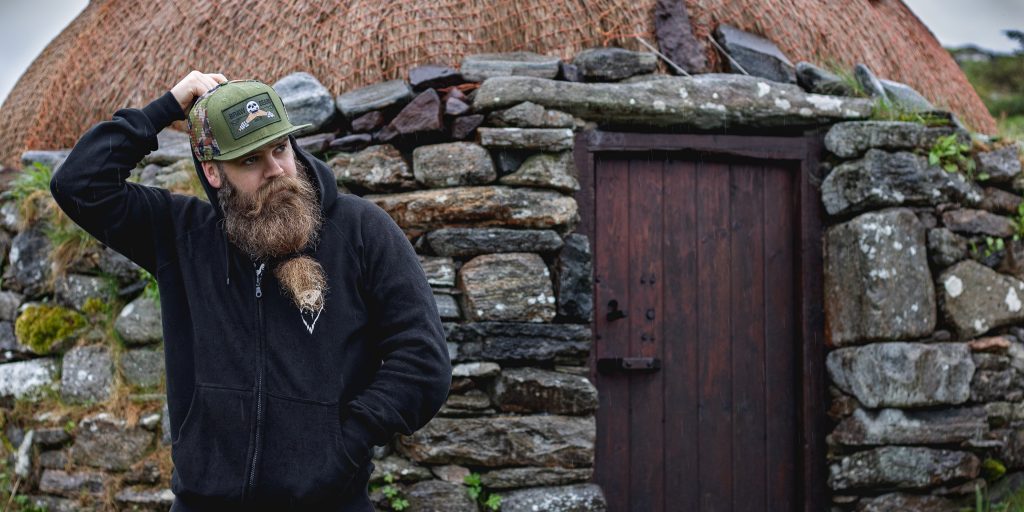 We found a nice spot to pitch up and sleep for the night just outside Swainbost. The beard was tied up for the duration of the day due to the high winds. I didn’t feel the need for beard maintenance today so just left it until the morning.

In the morning, before we set off I applied Braw Beard oil to hydrate the hair, then combed it through to detangle any snags.
Next I applied Braw Beard Butter to moisturise the hair and skin beneath the beard then brushed through with the boar bristle bush, evenly spreading out the products throughout the beard. It felt great. I know some people reading this may still be confused by the whole beard maintenance routines and the need for it, but when your beard feels nice and looks great, it’s enjoyable. It’s annoying when your beard is dry, itchy, feeling brittle and wiry.

This day, we set up more photoshoots and got work done before setting up camp just outside Stornoway. The wind was high again so I tied the beard for most of the day. Again, no need for beard care this evening before bed because the products from this morning were still doing their job. 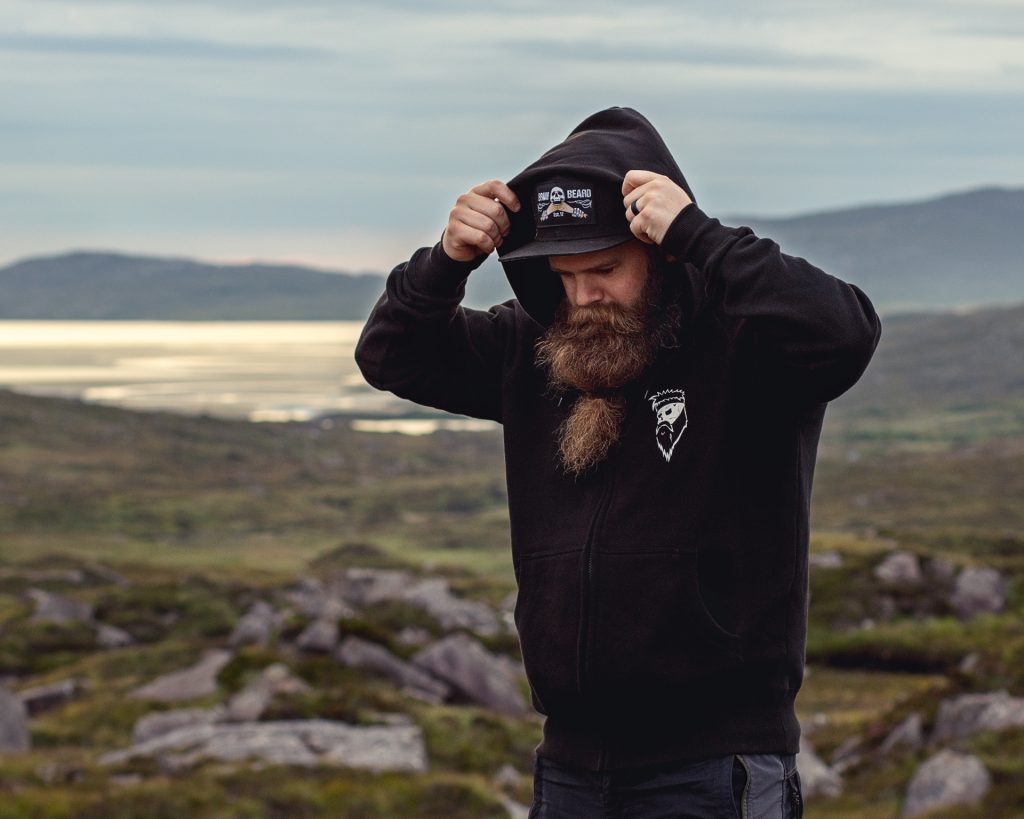 We were due to leave the next morning and I knew there was a shower available near the ferry terminal at Stornoway so I never bothered with any beard maintenance until I had a proper shower.

I managed to get a shower around 10am and it felt great to go through my usual morning beard care routine!
Braw Beard Wash in the shower to shift all the dirt, sea salt and sweat.
Once I gently towel dried my beard, I applied a few drops of Jarls Northman 1263 beard oil again.
Then combed through with the Braw Beard Comb to detangle any snags.
Chocolate Orange Braw Beard Butter was rubbed through the beard to moisturise it and the skin below (reducing itchiness and dandruff (beardruff)).
Finally the Braw Beard Brush was used to evenly spread the products through the hair. Brushing after using beard butter can help give the beard more volume, providing a fuller look.

The coastguard even gave us a send off….. or maybe it was a training exercise….

I hope you have enjoyed reading this. I wanted to share my beard maintenance routine for when I never had access to the usual amenities. Just a small beard care kit used at key times can help massively. We were roughing it some nights and setting up photoshoots in between, I had to make it work. I know Braw Beard care products work, I’ve invested a lot of time and money in making them the best products that I can, they did not disappoint.

My beard was kept in great condition on the road, I had to tie it down sometimes due to high winds but the photos still came out great.

I hope this has inspired you for the next road/camping trip you take.
Thanks for reading.
JJ.
Join the #Brawtherhood

Here’s Why You Need A Boar Bristle Beard Brush

Beard Balm vs Wax. What is the difference?