The Beard Care Routine For The Best Results

Aright? Welcome to my video, I am going to explain my daily beard care routine and what I use to look after my beard every morning.
I’m going to take you through the whole step.
Let’s just mess this up like I’ve been sleeping on it… There we go, like I’ve just woken up.

First thing’s first, I jump in the shower and I use Braw Beard Wash, it’s a natural shampoo formulated specially for beards. It’s got aloe vera in it which is really good for the skin underneath as well. It keeps the
dry skin away, it keeps the dandruff away, it keeps the irritation and the itchiness away.
After using this you will notice a instant difference. Your beard feels nice and soft, so use that in the shower (or bath). 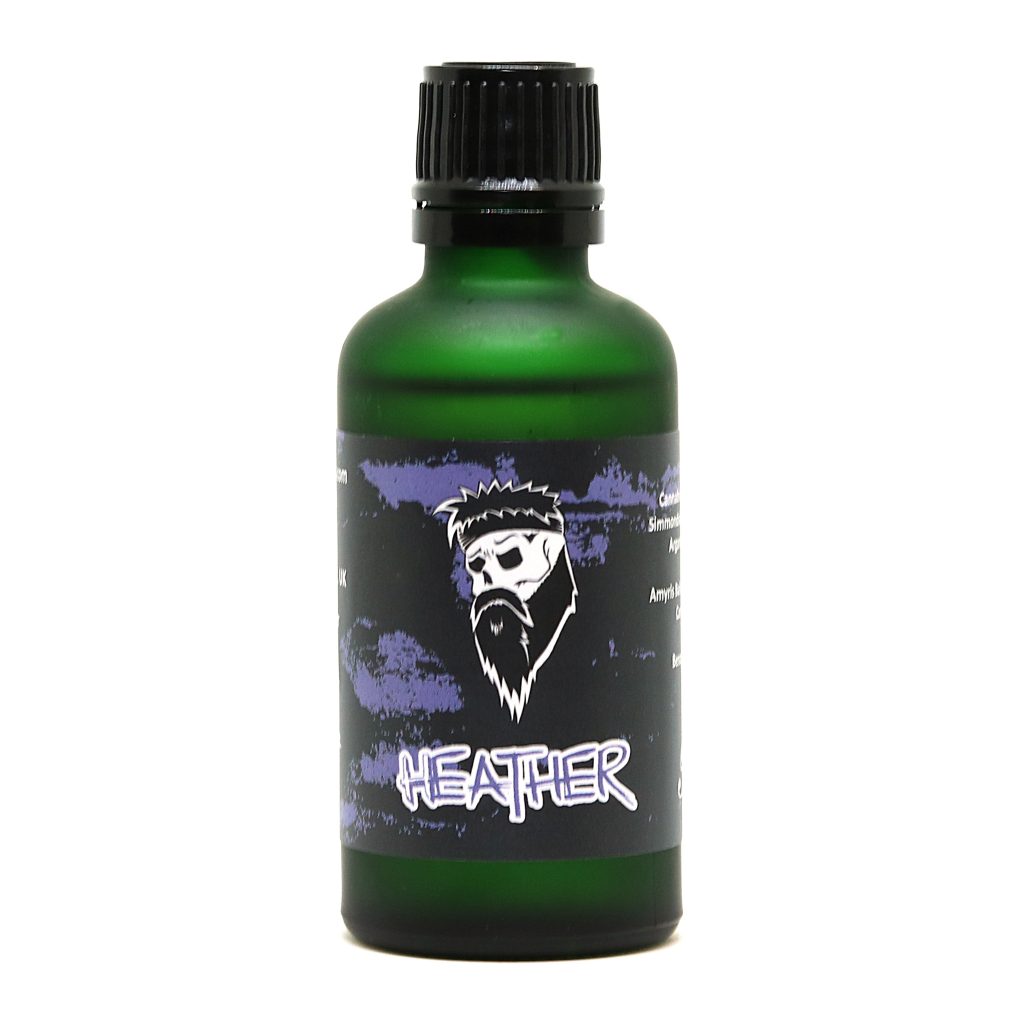 Then after that, I take some Braw Beard oil. This one is Heather, I quite like the smell of this one, it’s quite sweet.
Just dispense a little amount into the palm of your hand. Rub it in your hands and get full coverage. Then just cover your beard with it. Going from root to tip, get the underside, get the moustache as well. 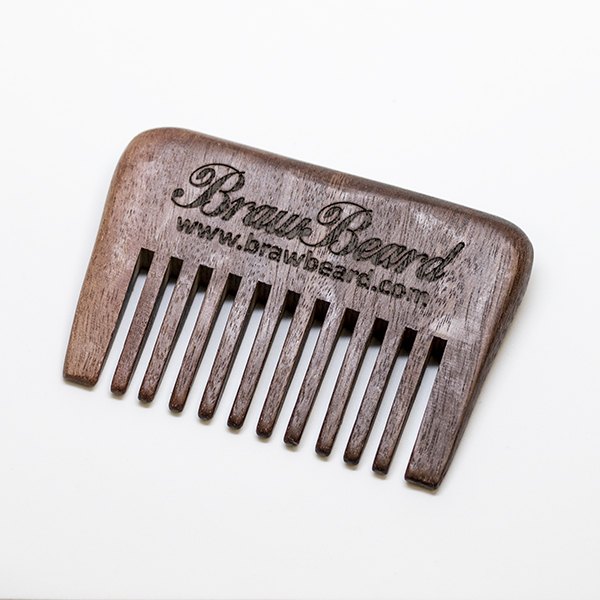 Once I’ve got full coverage with the beard oil, then I take a comb, a Braw Beard comb, the teeth spacing is perfect for the beard. It doesn’t catch or snag. It does the job.
I comb the front, going from root to tip. Then I work from the side, working forward.
Again working from the sideburn, working to the front, a wee bit on the tash.

Then get the underside as well, working from the throat forward. Detangle all the hair underneath that’s bunched up when you’ve been sleeping.
I can feel a couple of snags there, I just take it gently. Don’t go fast because it’ll snag and pull the hair. Working the sides as well, you’ll have the underside detangled and straightened out.
If you do suffer a natural fork at the front, detangling this will help fill the gap. So once you’ve done the underside, start doing the front again just to pull it back into shape. Comb the front, comb the sides working forward.
There you go, that’s it combed.

It’s probably good to go at that but because I’ve got a longer beard it still bunches up slightly on the sides. So I like to take control of that.

Anyway, that’s beard butter, it’s got beeswax in it, jojoba, cocoa butter and shea butter.
So it’s got a bit of a hold.
Scrape some of this out, just a small amount on your fingertip. We recommend about the size of a pea to start off with then you can add more or take some away depending on the length of your beard.
Put it in the palm of your hand and then rub your palms together and it becomes an oil. Then just apply that over, again full coverage, working from root to tip.
Get the underside, so it goes on like an oil but the beeswax sets slightly and will have a slight hold that keeps the wispy hairs in place. 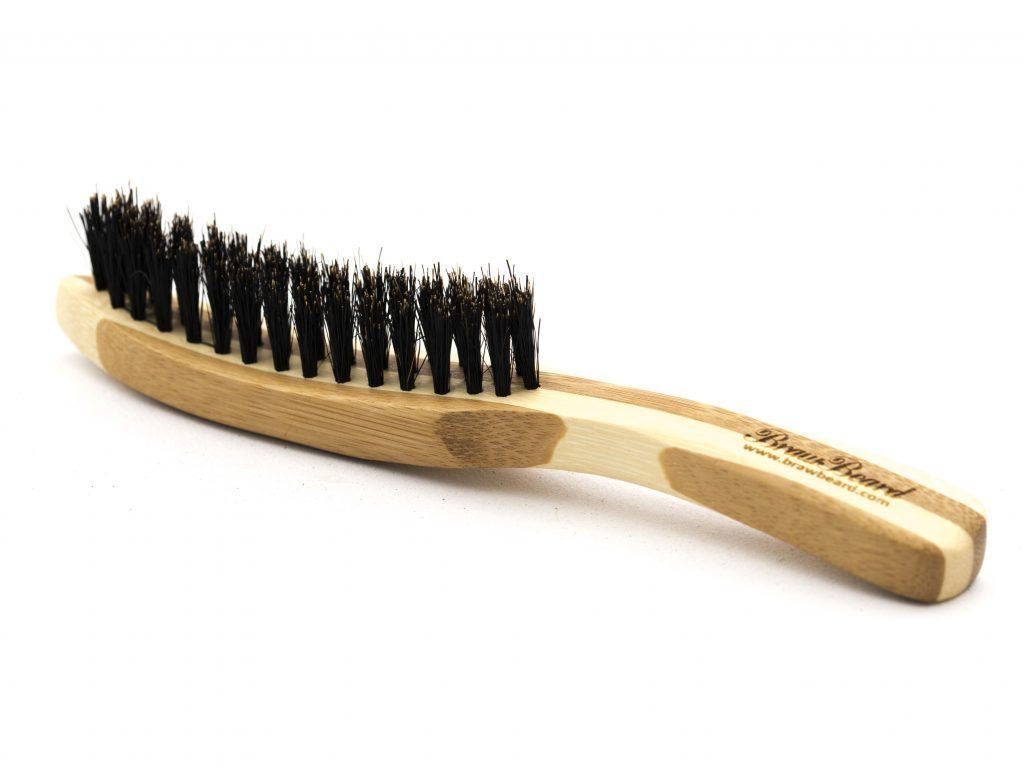 So once that’s applied, the last step is take the brush. The boar bristle brush, obviously it’s got thousands of bristles there. they evenly distribute the products and separate the hairs adding more volume.
Again, get the moustache, brush the moustache first. Then work from the lower lip out. Do the front first, then go from the sideburn and work your way forward to the front. Again the sideburn on the other side, working your way to the front. I also find working from the sides in, it trains the hairs to point to the middle. Again I’ve got the fork in the middle so that trains the hair to fill that gap.
Then again, just get the underside. Then the sides, working forward, get the front and there we go. Job done, beard care routine complete.

I just pull it into the shape that I like and there you go, that’s my beard care routine.

I do that every morning, I use the Braw Beard Wash every morning too. Everybody is different, everyone has their own beard care routine. A lot of people say don’t use shampoo every day. It works fine for me so i stick with it.

I hope that helps? Thanks for watching.
JJ
Join the #Brawtherhood

Is your winter beard ready? Prepare your chinsulation.