The crash that started the Braw Beard movement.

What started the Braw Beard movement?

A’right guys? John from Braw Beard again. If you’ve been paying attention to the videos going up recently, you’ll probably know the story of how Braw came about. But there’s been a few people asking about the crash and mountain biking n stuff.

So, I thought I might as well tell you the story. So I’d been racing for a few years, mountain biking, downhill and endurance. Then in 2011 there was a 6 hour endurance race at Fort William. It was to see how many times you could do the World Cup track in 6 hours.

2 weeks prior to that, I was training, went over the handlebars, hit a big rock and broke C7 and T1 in my back and, yeah, I was in hospital, I didn’t need to get surgery or anything, it was stable fractures so I had to wear a neck brace for a while.

But I had been training a year for this race, sooo I asked the doctor when I was getting discharged when can I get back on a bike and they said you are talking like 6 months. I was like f**k I’ve got a race in 2 weeks, ok…

So I ended up racing 2 weeks later anyway which was very stupid like but, hey, I wanted to do it. So yeah, dosed myself up on painkillers and kinesio tape on my back, held it in place. The whole plan was just go and do 1 lap, see how I feel after that, if it was ok, do another lap. Obviously the adrenaline kicked in and I ended up finishing the race, I think I finished 31st out of 120 or something. I done 14 laps of the track and then I took 6 months off the bike, well 4 or 5 months off the bike to let it heal. 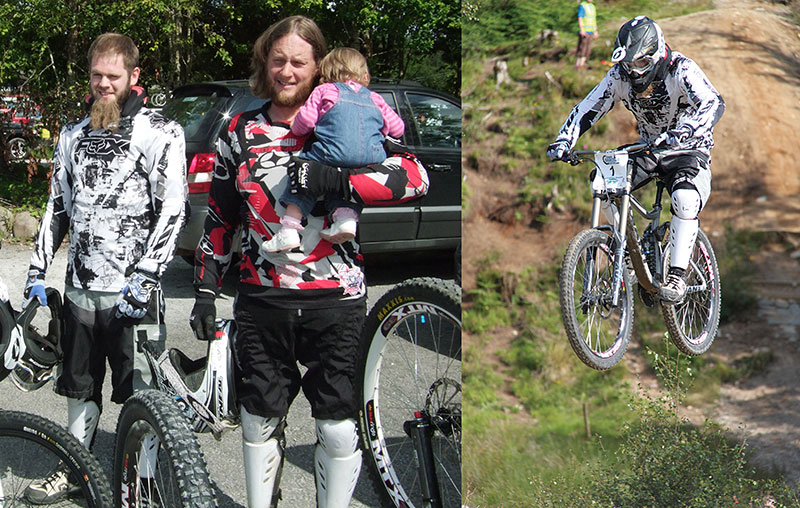 Before the race and during. 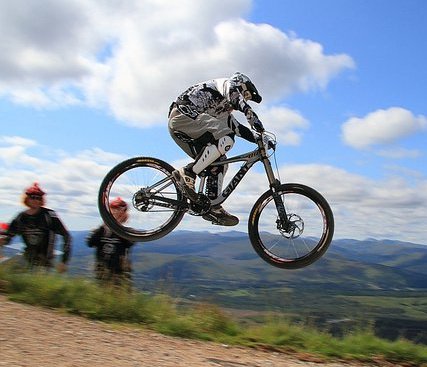 This was lap 9 or 10, forgot I even had 2 broken vertebrae at this point…

It was very stupid to be honest because if I had crashed I probably wouldn’t be walking at this point but hey ho, if I never done it, I wouldn’t be where I am now with Braw Beard Oils so, y’know, it kinda worked out.

Then I guess, through rehab I learned massage therapy and how to make my own oils, my own massage oils. I knew at the time my girlfriend was using hair oil for split ends and keeping it moisturised and what not. Then at this point I was back on the bike, training and stuff so, I had a beard, I had facial hair of varying types and the helmet strap, when you are wearing the helmet, it was getting pretty itch underneath. It was irritating the hair and skin underneath so I thought, I’ve got this massage oil, I wonder if I can make hair oil and tailor it to suit the beard, for thicker hair.

And I did, it took a bit trial and error, I dunno, 6 or 8 months it took, to get it right and then I started taking it in my kitbag everywhere I went. Every time I was out racing my hair was drying out with the weather. I’d just apply some beard oil at the end of the race and it was all good. it was working, it was keeping the irritation away, the redness away.

So that’s how the beard oil came about, that’s how Braw Beard came about anyway. Then I started to give it to friends who raced mountain bikes and family and friends who had beards. It was getting good feedback, so, that’s when I started making it into a product and got it safety assessed and insurance n stuff, then built a website and put it on the market ready to sell.

So yeah, that’s how Braw Beard came about. You get a lot of people saying, if they’ve got shorter beards “I can’t use that product, my beard’s not long enough”. I had just stubble under my neck and a short beard and it was doing the job. It’s designed for that, our motto is For Stubble To Skiffin’ Rubble so even if you’ve got stubble, it is essentially a moisturiser as well. It keeps the skin soft, keeps the irritation away, keeps the dry skin away and it keeps your chin smelling great so, you can use it at any stage. It doesn’t matter if your beard is down to your feet or if it’s just stubble, it’ll work.

If you are wondering what that is sticking out of my head, it’s a spine, I like to keep that as a reminder of how Braw started.

Thanks for reading, cheers.

Why Do Men Grow Beards? Here’s My Story And Why I Grew One