Often when most people think of “oil” they probably picture a greasy rainbow slick floating on water somewhere. It may look pretty but you wouldn’t want to get it on your skin. So I can totally understand when people who are new to beard care products ask, “will beard oil make my beard greasy?”.

The answer to that question really depends on where and from whom you buy your beard oil and what ingredients the product contains.

If the beard oil has a long list of ingredients that you cannot pronounce, there’s a good chance there will be some chemicals in it which just sit on top of the hair. Rather than being absorbed and utilised, synthetic ingredients often sit on the hair, leaving it feeling greasy.

Many high street shop’s beard oils are filled with chemicals to prolong shelf life. Phthalates and other harsh chemicals are added make fragrances last longer so that they can mass produce them to sit on shelves for a couple of years if required. Phthalates are used to promote flexibility and durability in plastics (not what you want sitting on your hair).

Will mass produced, bought in a superstore, filled with chemicals beard oil make my beard greasy? More than likely, YES, they will leave a greasy residue on your beard.

What about Braw Beard oil?

In October 2012, I made the 1st bottle of Braw Beard oil that I was happy with (that became Wulver).

From late 2011 until then I was playing around with natural oils for my sports therapy courses. From making massage oils, I then made natural hair oil for my wife, which I started using on my beard at the time.

I’ll be honest and say it wasn’t great. As a hair oil it was perfect BUT beard hair is different, it’s thicker and more coarse, so hair oil wasn’t doing the job that I expected. This is where Braw Beard oil really started to become a craft. Various versions followed, some felt greasy, some dried the hair out. Then I got the recipe just right. 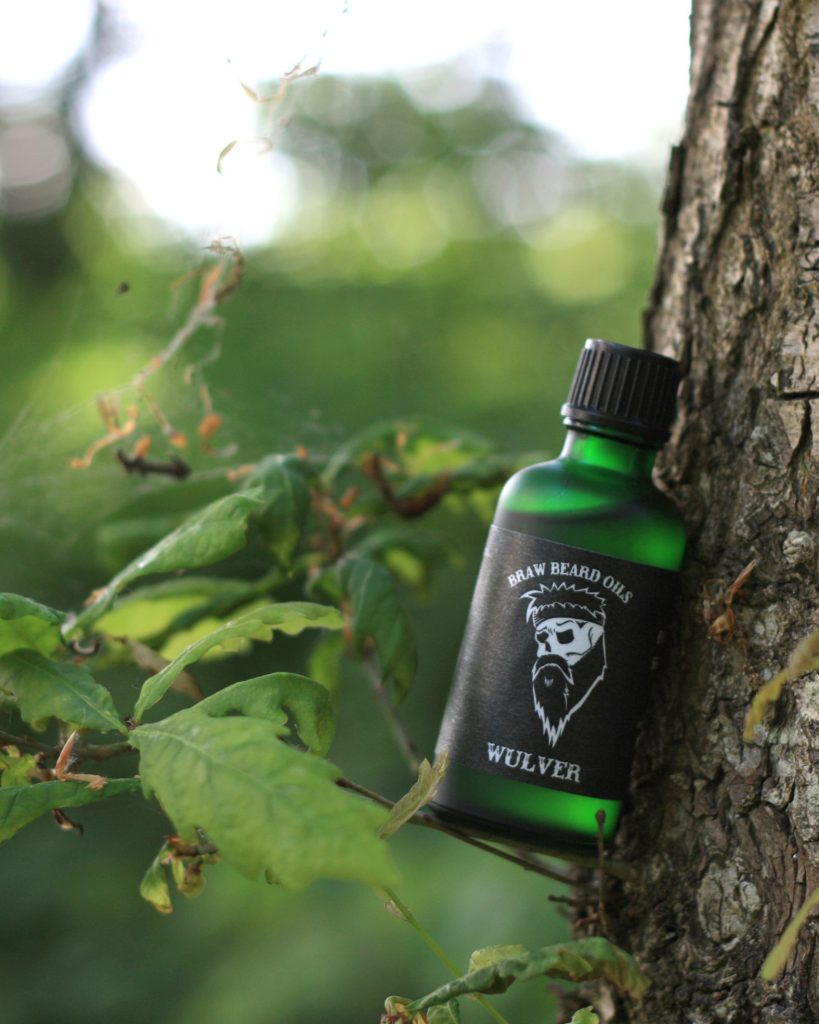 It’s all about getting the right balance

It’s all about getting the right balance. I was taught the correct base oil to essential oil ratio from a friend who studied traditional Chinese medicine for several years in China. He knows his shit. That knowledge was passed to me through my sports therapy days which then led to starting Braw Beard after breaking my back in 2011. It was getting that ratio right within the various ingredients suitable for beard hair that was the tricky part.

I’ve seen people try to make beard oil using only essential oils!! Doing that will mostly result in dry, brittle hair and spots with damage to the skin.
Essential oils are 100% natural but that doesn’t mean the can’t be dangerous if used in the wrong quantities.

For a decent beard oil, you need a nice breakdown of natural base oils with essential oils to fragrance and provide benefits (see HERE for an article on why I chose certain essential oils)

What is in Braw Beard oil? 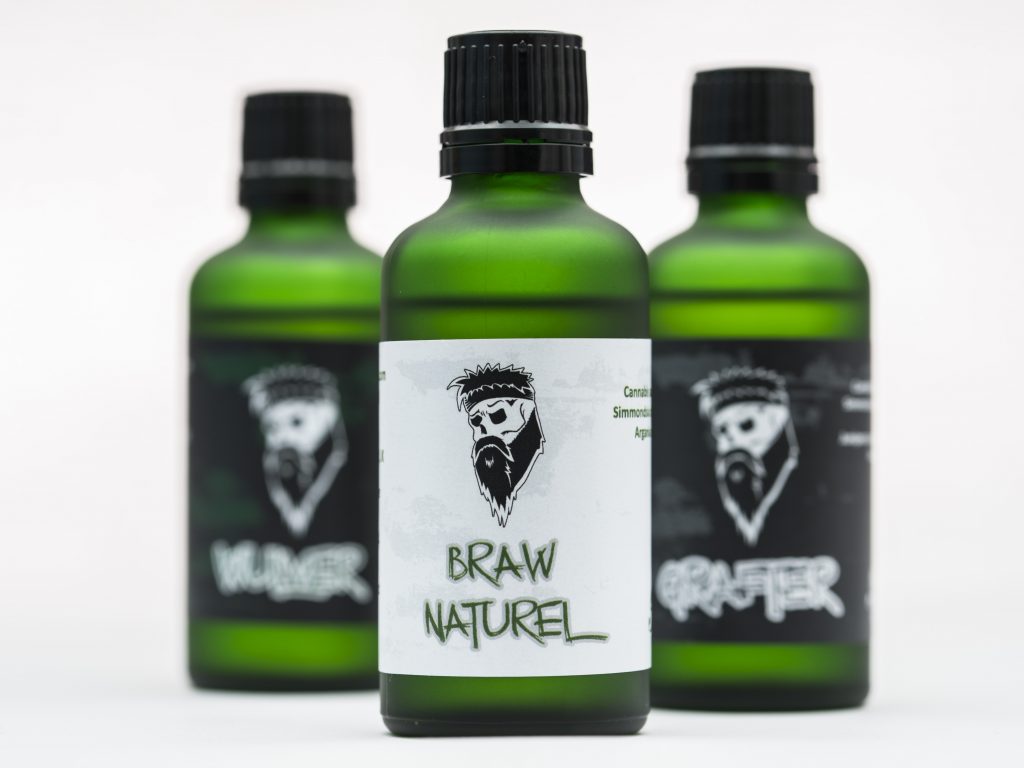 The main base oil ingredients used in Braw Beard oil are hempseed oil, jojoba oil, vitamin E and argan oil (argan is not in Grafter, Lover or Wulver).

contains a vast array of good fats, vitamins and proteins that are beneficial to the body, not just the hair.
It contains omega 3, 6 and 9 fatty acids which are known to stimulate hair growth. The oil promotes blood circulation on the scalp too, it’s easily absorbed by the hair which can help strengthen the hair, reducing breakages.

it’s an oil extracted from the seeds of the jojoba plant. It is rich in vitamins and minerals too. This oil is mostly used as a moisturiser which is great for the scalp to reduce dandruff, itchiness and irritation. Jojoba oil make the hair feel soft without feeling greasy.

(not in Grafter, Lover or Wulver) – is extracted from the kernel found in the argan tree. Known as liquid gold, argan oil helps repair damaged hair and split ends. It is often used as a leave-in conditioner (which our beard oil is anyway) which can help reduce irritation, inflammation, sores and itchiness in the skin below under your facial hair.

I chose the above ingredients as a base for Braw Beard oils because they are beneficial. One of the main problems men face when growing a beard is irritation. They get the dreaded beard itch then shave it off. Using a quality beard oil like Braw Beard oil, will reduce the itchiness and irritation and let you get on with growing a great beard. The base oils above are known as moisturisers that are absorbed, so they will not sit on the hair leaving it feeling greasy.

As mentioned above, Braw Beard oils are scented with natural essential oils (check out THIS article for more details).

I’ve tried my best to create a product that is non-greasy, everyone who has left a review on the website agrees.
Braw Beard oil is 100% natural and absorbs nicely, leaving the beard hair soft, smooth and not greasy at all.

BUT if you apply way too much beard oil, there will be excess on your beard, leaving it feeling greasy.
(Check THIS article on applying the right amount of Braw Beard oil).

Here’s what our customers say:

“Hands down the best beard product I’ve ever used. Easy to use, smells incredible, remarkably non-greasy, and the wife likes it too!” – Innes H.

“Braw Beard consistently deliver awesome products. I’ve never been disappointed using this brand and will continue to use them. Well done to all at Braw Beard. Thank you.” – Alan G.

“Just received the package today and it smells nice spicy type of blend but probably more importantly good quality carrier oil comes through to nourish my beard!” – Drew A.

There are 300+ reviews at www.brawbeard.com if you need help making up your mind.

I hope this has helped answer if beard oil make my beard greasy? Also hopefully it will help you to decide how to choose a good quality beard oil rather than just grabbing a cheap one off the shelves in your local supermarket. 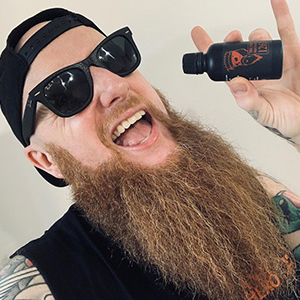 Thank you for taking the time to read this article.
JJ
Join the #Brawtherhood

Here’s Why You Need A Boar Bristle Beard Brush

How I avoid eating my moustache.